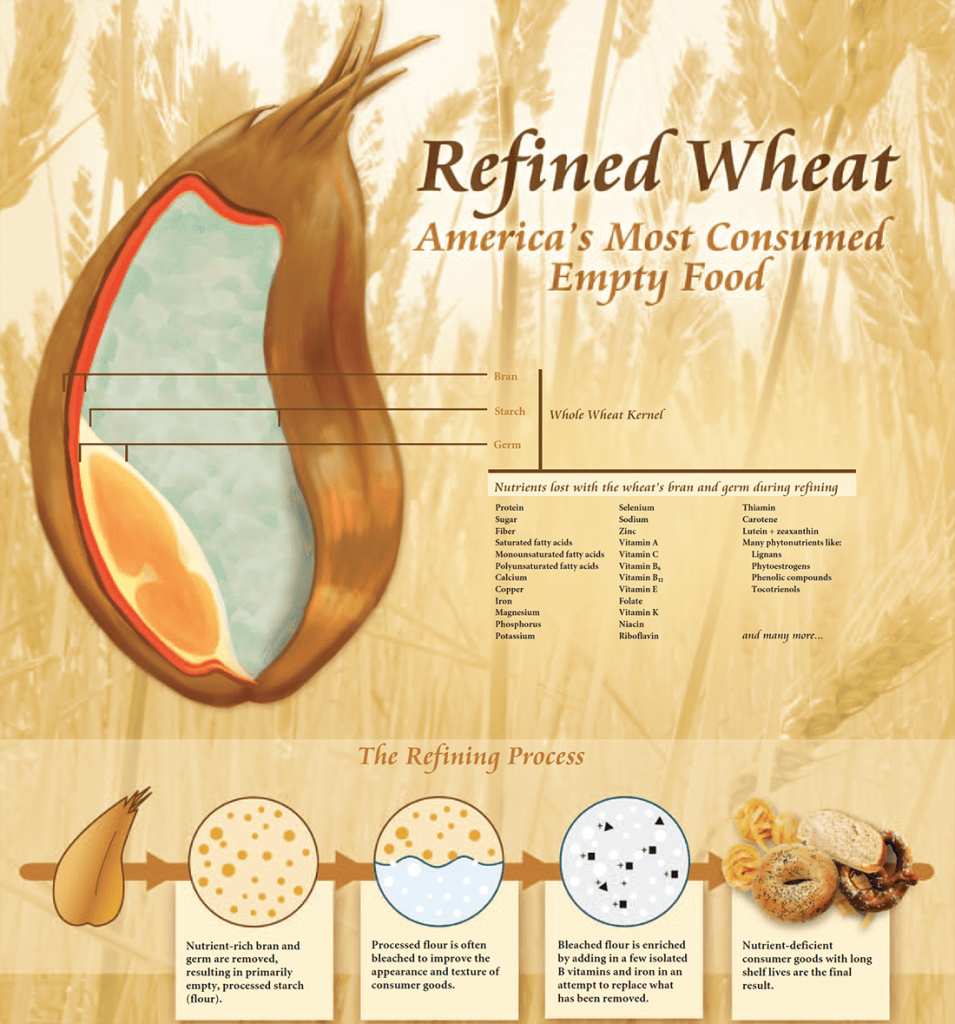 The shocking truth about Gluten that has been kept a secret from you may also be keeping you sick.  Or, rather, I should say, — the misinformation campaigns about gluten have misled you in such a way that may not necessarily be in your best interest.

Much of the information here comes from Mary Frost’s book, Back to the Basics of Human Health and also Judith DeCava’s book, The Real Truth about Vitamins and Antioxidants.

Most people have been INCORRECTLY led to believe that gluten is an evil substance that does nothing but cause health problems like skin diseases, Chrone’s Disease, rheumatoid arthritis, high blood pressure and all sorts of terrible health problems.  While there is “some” truth in this, it is very misleading. MOST people are sensitive to or allergic to wheat, but this does NOT necessarily mean that these same people are sensitive to or allergic to gluten in all of its forms.  The problem with most wheat is that it has been processed and is mostly deficient of nutritional value.  In fact, a great deal of wheat is genetically modified which means that it contains foreign proteins not found anywhere on this planet or any other known planet.  These foreign proteins cause a huge number of health problems because they are completely foreign and unknown to the human body so your body does not know what to do with those foreign proteins.  They have side effects and make you sick.

What most people do not realize is that the WHEAT GERM is loaded with all sorts of nutrients and also contains traces of gluten.  The wheat germ is a whole food that contains tons of nutrients with a variety of health benefits.  For example, just one of the nutrients found in wheat germ is vitamin E complex.  Vitamin E complex is NOT just the isolated gamma and delta tocopherol— a substances which quickly causes fat imbalances that can lead to heart conditions and visual difficulties.  Vitamin E complex is compcomposed of lipositols, E2, E3, F2, Xanthine, F1, a wide variety of phytonutrients, enzymes and co-enzyme Q-10, selenium, delta tocopherol, gamma tocopherol, beta tocopherol, and alpha tocopherol.  This is just 1 ingredient of about 100 different things found in the wheat germ.

Many people are worried about having a “gluten attack” or a gluten allergy without really understanding what it is that could cause such an “attack” or “allergy”.  Gluten in very small amounts is not only safe but a nutrient found in many Whole Foods.  However, this same substance is also usually attached to other particles which make up “gluteomorphins.”  Gluteomorphins are incredibly dangerous and harmful.  Gluteomorphins are the morphine substances, opiates, that stimulate the brain in the exact same way that opium does while creating a very powerful addiction.  This is not such a good thing.  However, small amounts of many substances can be helpful.  Wheat germ contains iron and zinc and vitamin E and many other nutrients so it has tremendous health benefits and can decrease a person’s sensitivity to wheat and gluten even though it contains traces of gluten.  Because the form that the gluten is in is safe and very beneficial to the body, it is a lot like the benefit of a homeopathic remedy.  You expose yourself to very small amounts of the gluten (which is normally harmful) and because there are so many nutrients naturally found in the wheat germ it decreases one’s sensitivity to gluten.  Giving a person large amounts of gluten or whole wheat or rye or oats does just the opposite of giving them wheat germ.  It is exposing then to LARGE amounts of the gluten exorphins which then leads to an allergic response in nearly everyone who consumes them over a long period of time.

Do not be fooled.

Plenty of people will tell you, “I am not sensitive to wheat.  I don’t have any allergic response to wheat.”  And, meanwhile, they suffer from high blood pressure or skin conditions or arthritis or joint aches and pains or foggy thinking or regular fungal infections or some other symptom that is a result of the gluten allergic response.

When vitamins were discovered, they were discovered in foods.  When foods were studied, a lot was learned.  In fact, in the studies that showed that vitamins really do work, a food-source nutrient (such as wheat germ oil) as used.  In studies showing that vitamins don’t work, a synthetic (such as an alpha tocopherol vitamin E) was always used.
Since food nutrients tend to vary, they were difficult for an agency like the FDA to control.  But synthetically isolated vitamins were easy to standardize and control.  The measurements of milligrams or micrograms as “standards” of effectiveness were based on animal tests using isolated vitamin fractions, not foods.
Over the last 60 years conventional medicine has evolved into a tight-knit profession that largely ignores the downturn in the nutrient quality of our foods.  The early nutritionists understood that these nutritionally deficient and dead foods were the main cause of disease through cellular malnutrition.  But this line of thinking has been left out of conventional medicine.  In her book, The Real Truth About Vitamins and Antioxidants, noted nutritional author Judith DeCava makes some important points.
From DeCava…. “Medical schools in this country are now standardized (if not homogenized) and no matter what medical school one attends, one gets essentially the same instruction”
“In 1991 only 22 out of the entire 127 accredited U.S. medical schools required a single course in nutrition, which only 5% of the medical students actually took.  Patients look to doctors for all kinds of advice and, though ill-prepared to offer advice in some areas, doctors seem to believe that they have a sort of supremacy to lend their expertise in areas of medicine for which they have received no training, “as in nutrition, leading them to discount ideas and even valid research.”
“From World War II onward, nutritional information has been based on research studies funded by the interests of the pharmaceutical companies which, (and this might surprise you) are the manufacturers of all crystalline and synthetic vitamins.  “A few large pharmaceutical corporations such as Merck and Hoffman-LaRoche produce the crystalline-pure vitamin fractions used in virtually all nutritional supplements whether found in a drug store, health food store, or doctor’s or nutritionist’s office.  Whole food complexes are just not as profitable.”  Most vitamin fractions can be produced for pennies and sold for a few dollars and up.  The profits are immense.
“Established medicine has based itself around the use of a large number of chemical substances (drugs), which appear to bring relief from specific symptoms.  Synthetic vitamins, which have drug-like effects, are the only vitamins accepted by the majority of the medical profession… when vitamins are accepted at all.

Let’s talk about Vitamin E for a minute…..  Remember, vitamin E Complex is just one of the components of wheat germ.

Why are Natural Complexes So Important?

“Wheat germ is a whole food complex.  Vitamins are “groups of chemically related compounds.”  In the case of vitamin C there is a single part identified as the organic nutrient, i.e., ascorbic acid as vitamin C.  But there are enzymes, co-enzymes, antioxidants, trace elements, activators, and other unknown factors that enable the vitamin to get into biochemical operation.  (See diagrams on the previous page.)  In other words, ascorbic acid is only a part of the vitamin C complex.  It is not, all by itself, vitamin C.”
“With foods and food concentrates—-containing whole nutritional complexes—-the body can choose its needs for assimilation and excrete what it does not need; this is called ‘selective absorption.’  On the other hand, with fractionated or isolated and/or synthetic vitamins, there is no choice; the body must handle the chemical imbalances and toxic overdose.”
“The natural vitamin complex of foods cannot be taken apart and reassembled and be expected to work the way it did before.  It’s not like a car or a watch; it’s alive.  In fact, when it’s taken apart it won’t work at all.  Yet this is exactly what has been done to produce crystalline or synthetic vitamins.”
The “scientific method” then takes these dead and inert vitamins and develops trials or experiments with them.  DeCava sees this as unfortunate: “Synthetic, fractionated, crystalline-pure vitamins are not whole, natural compounds; they are not food which human systems can utilize as nutrients, with which human systems are familiar, and which will not disrupt normal biochemistry.  How could any scientist say that the body does not know the difference between natural and synthetic vitamins?”
What has happened is that “true science is now judged on the basis of an experimental method which measures, classifies, and duplicates reactions and effects of single chemicals.  This rules out testing natural vitamin complexes.”  People do not understand that the rules and parameters for testing vitamins from the 1960s on pretty much eliminate the use of any natural food-based products.  What have been used in “vitamin” tests are micro-parts of oils and coal tar that can be patented.  You can’t patent wheat germ oil or liver or yeast and make enormous profits.

VITAMIN E IS BEST IN ITS WHOLE FORM

Most wheat on the market today has been refined.  Whole Wheat Kernels are composed of the bran, starch, and germ.  The wheat bran and the wheat germ has all of the nutritional value.  The wheat starch is essentially sugar and empty calories without any nutritional benefit.  The refining process causes the nutrient rich bran and germ to be removed, resulting in primarily empty, processed starch (flour).  Processed flour is often bleached to improve appearance and texture of consumer goods.  Bleached flour is enriched by adding in a few isolated B vitamins and iron in an attempt to replace what has been removed.  Nutrient-deficient consumer goods with long shelf lives are the final result of this process.  As mentioned above, much of the wheat has been genetically modified.  The most consumed food in America is refined wheat.  Refined wheat is wheat that has lost the bran and germ during refining / processing.  Nearly ALL of the nutrients found in wheat are found in the wheat’s bran and germ.  Just a FEW of those nutrients are listed here below:

…and many, many, many many other nutrients and cofactors and phytochemicals.

It is all of this processing and manipulation of what was once the Whole Wheat Kernel from Einkorn that causes most people to have all of the allergies that they do to wheat.  These allergies, for the most part, are IgG and IgA allergies.  This means that the allergic response can develop over time and the research has clearly shown that ONE SINGLE ALLERGIC EPISODE CAN LAST UP TO 6 MONTHS.  Once a person has been exposed to and developed an allergy to Genetically Modified wheat, then they will often have an allergy to organic wheat as well because their body confuses the 2 and is now highly sensitive (allergic) to the wheat substance whether it is organic or not.